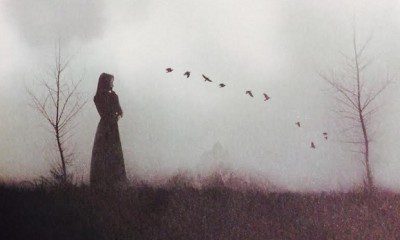 I have never seen wolf in nature, only in captivity. But as a little girl, when I visited my grandmother, we would hear them at night howling higher up on the mountain – eerie, lingering wails. I would get out of bed and go downstairs to find my grandmother standing by the kitchen window staring out into the dark.

‘Maybe Kenneth’s dogs,’ she would say to me, face grim.

We both knew these were not dogs.

My grandmother was afraid even though we were inside. It was clear wolf was not just a wild animal, but more. Wolf was part of the night. And wolf could, obviously, pass through closed doors.

In daylight, it felt different. She’d point out their dens. We’d study their tracks in the snow.

‘This is the cliff they stand on when they howl,’ she’d say and show me a big stone.

In the daytime we were Christian and we were not afraid. 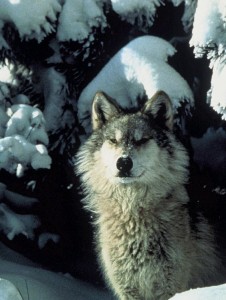 Poor wolves. Seen as evil, or as a tool for evil since the beginning of times. In the 13th century, the Catholic church said that wolves were put on the earth by God to punish mankind for their sins. And in Sweden people were scared to the extent that they wouldn’t use the real name which in Old Norse was ulv in case it might attract the beast. Instead we used the noa-word varg, which means something like ‘the one who commits violence’. Later varg became standard and then we couldn’t say that either. People began to say ‘grey legs,’ or ‘the grey one.’

The Swedish expression vargavinter ‘ – ‘wolf winter’ – means a very long, cold winter. It was sometimes used to describe the bitterest winter with starvation. People feared that during such winters, wolf would come south and look for prey… The old Nordic religions talked about fimbulvetr, ‘the large winter,’ that preceded the destruction of the world. It took place when Fenrisulven, the ‘wolf of the wolves’, had eaten the sun. ‘Wolf winter’ is now also used to describe the darkest of times in a human being’s life – the kind of period that imprints on you that you are mortal and, at the end of the day, always alone. And ‘vargtimmen’, or ‘the wolf hour’, is that time at dawn just before light returns. The one who can sleep has their worst nightmares; the one who cannot, is gripped by severe angst.

For many people, wolf is an important symbolic animal, or totem animal. As a spiritual animal it symbolises a strong connection with instinct. The wolf is a representation of the night – the lonesome and scary time. But wolf ventures far into the forest to find what he requires for sustenance and if we, similarly, face our deepest fears, we might discover important things about ourselves. 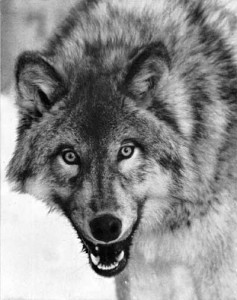 Wolf has always polarised the opinions in Sweden. It still does. Cattle owners feared it, wanted it dead. Hunters admired it and wanted to learn its skills. Today the debate is between those who want to permit hunting and limit the number of wolves in Sweden, and those who say they are a vital part of our fauna and must be protected. For an animal which isn’t seen often, it commands a lot of emotion.

And it does. Seeing wolf in captivity, I felt incredibly sad, but also fearful. It was irrational, and yet. ..

‘It’s in a cage,’ my husband pointed out.

This – this deep-rooted fear of the animal – the expression ‘wolf winter’ – the fact that the characters in my book are all forced to face their deepest fears – is why I selected wolf to be Frederika’s spirit animal. It is said that spirit wolves are too difficult to tame, but the girl is powerful. If anyone can do it, it is her.

And now, here in Calgary, we hear coyote howl at night. Doesn’t bother me at all.

Wolf Winter will publish in February 2015. 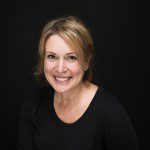 Cecilia Ekbäck was born in the north of Sweden; her parents come from Lapland. During her teens, she worked as a journalist and after university specialised in marketing. Over twenty years her work for a multinational took her to Russia, Germany, Franc …

2 comments on “Wolf Winter: The Origins”