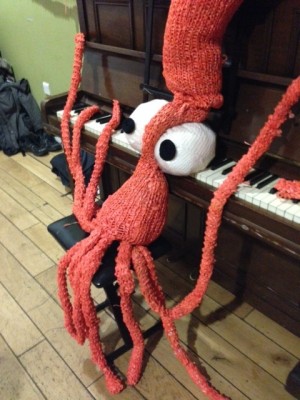 Posted on February 13, 2014 in Books with tags Events and exhibitions, The Kitschies

What do squids, dodos, and blue wigs have in common? The 2013 Kitschies Awards Ceremony, that’s what!

Last night the Dodo let the Hodderscape Team off their incubating duties to honour her cousin The Kraken at the annual Kitschies Awards for ‘the intelligent, progressive and entertaining in works speculative and fantastic’ . We nearly fell over ourselves to escape the hatchery and went mob handed and thirsting for rum to The Seven Dials Club in Earlham Street. One  problem was immediately apparent: we had only one blue wig to share amongst the four of us. Note to self: next year remember to dress with ‘tentacular flair’ as the Kitschies co-founders Jared Shurin and our very own Anne Perry suggest. 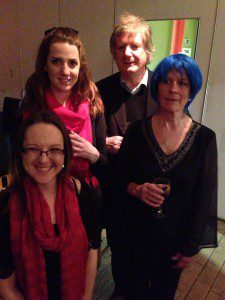 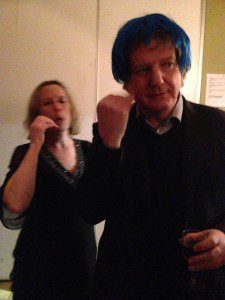 However, wherever one roams the Dodo is not far away. Past the siren call of Kraken Rum the first person to encounter the team was none other than the spectacularly-gifted Sarah Anne Langton, creator of our Beloved Bird Leader. We genuflected and obeised  and sidled past to take out seats. Jared made a great speech which somehow connected Science Fiction and Cheese — it raised a mighty cheer. Anne Perry, resplendent in cocktail dress and cephalopodic necklace,  entranced and mesmerised. Behind her glittered and glimmered the prizes: the bedazzling tentacles she had created in her sub-oceanic lair on the South Lambeth Road. 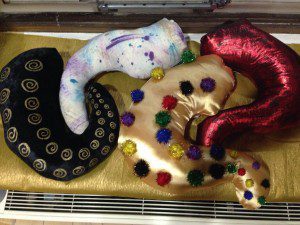 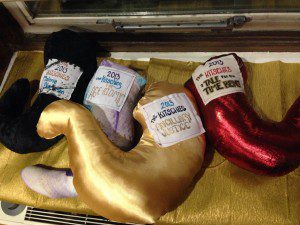 The awards began. The huzzahs from that moment on barely relented. Malorie Blackman, our beloved Children’s Laureate, received the Black Tentacle for achievement outside the normal range of Kitschies voting classes. Our heads were still ringing with the applause when Lee Harris and Adam Christopher carried off the Inky Tentacle on behalf of Will Staehle for the gorgeous cover of The Age Atomic. Events were practically tripping over themselves now. Onto the stage bounded the ever-effervescent and supremely witty Kate Griffin to award the Debut Golden Tentacle to Anne Leckie’s jaw-droppingly brilliant Ancillary Justice; her Orbit editor Jenni Hill received the suckers on behalf of the author. Now the vast crowd grew hushed as Nick Harkaway, a man who lives tentacular flair every moment, took the stage. The time of the Red Tentacle had come. You could almost hear the sea weed waving. Nick extoled the glorious array of candidates and, indeed, we wept to think there could only be one winner. It was to go to a book which everyone has been and will be talking about: Ruth Ozeki’s beautiful  A Tale for the Time Being. Her suave UK agent Caspian Dennis seized the cephalopodic limb, raised it triumphantly over the tentacles of the mob below and the awards, alas, were over for another year. 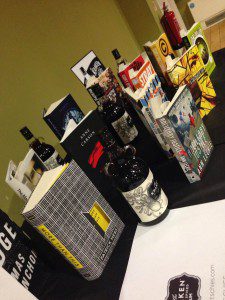 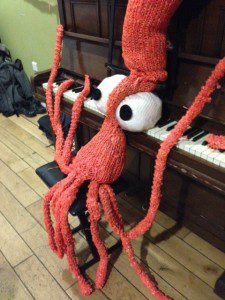 With drooping plumage the Hodderscape team returned  nestwards, assured once more that in the hands of the Kitschies and their lovely circle of friends the future of the speculative and fantastic will always be safe.

To learn more about the Kitschies, head this way.