Spoiler-free but Oh So Many Feels review of Black Panther 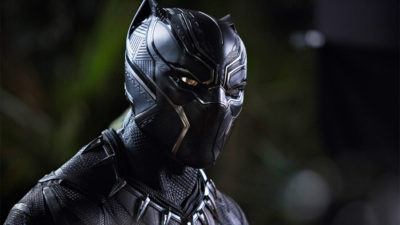 Black Panther picks up one week after the seismic events of Captain America: Civil War and sees T’Challa (Chadwick Boseman) grieving for the loss of his father, while preparing to ascend to the throne of king of the nation of Wakanda. Whilst he deals with this, he must also confront an old enemy from his nation’s past and deal with a new threat that could place the citizens of Wakanda and the world into jeopardy.

October 28th, 2014. This date might not mean much to you, but for me, it was the start of something very special. On a stage at Grauman’s Chinese Theatre in downtown Los Angeles, Marvel Studios’ President Kevin Feige confirmed that we would finally be seeing Black Panther on the big screen for the first time. The announcement sent ripples of anticipation across the world as fans began to discuss what kind of shape the movie would take and what it could mean for the representation of black people in Hollywood movies for years to come.

Black Panther is without a doubt, Marvel Studios’ most successful origin story to date and arguably the finest film they have ever made. From start to the finish, it delivers thought-provoking drama, family conflict and all the comic book movie action you could want. The movie’s opening acts plunge you right into the heart of a politically charged time in American history but quickly show how these events will have a lasting impact on the characters of the film and their respective journeys.

The performances are all brilliant, which is to be expected from one of the finest casts ever assembled for any movie. Chadwick Boseman continues where he left off in Civil War, delivering a performance of grace and humility, whilst also showing a more playful side to his character. This is in part thanks to his relationship with his sister, Shuri (Letitia Wright), who damn near steals the movie with every scene she’s in. Shuri has some of the best lines in the piece, and Wright enthuses her with so much charm and wit that you will be crying out for more! Other standouts include Danai Gurira as leader of the all-women Wakandan special-forces, The Dora Milaje and a fierce uncompromising warrior who will kick your behind in a heartbeat, and Michael B Jordan as Killmonger, an antagonist with so much charisma and arguable justification for his actions, you will question whether he is actually an antagonist at all. There is also brilliant support from Andy Serkis, Angela Bassett, Forest Whitaker, and a potential star-making cameo from Winston Duke as M’Baku, leader of the mountain tribes.

The most remarkable achievement of Black Panther is its ability to allow all of its characters the opportunity to have a complete story arc. Even characters on the periphery manage to have a full story within the plot and this is something that is so rare in modern blockbusters. Huge credit goes to director, Ryan Coogler, and co-scriptwriter, Joe Robert Cole, for skilfully fleshing out each character’s arc, giving all of them a role to play in this rich and emotionally complex story.

The costume design from Ruth E. Carter manages to marry together elements of traditional African culture whilst also embracing the technological marvel of Wakanda and its people. The set design is stunning, making Wakanda feel like a living, breathing place and the beautiful cinematography from Rachel Morrison captures the beating heart of a country where tradition and highly advanced science meet in a blend of colour and majesty.

The only criticism I would have of this film is that it’s visual effects in certain parts towards the film’s climax leave a lot to be desired at times. There is a strangely rubbery quality to some of the CGI used which takes away some of the dramatic tension that the film carefully builds towards. But don’t let that put you off.

Black Panther is an ambitious film that sets out to introduce the world to a new vision of African culture and heritage, whilst also being an engaging and exciting blockbuster comic book movie and it succeeds gloriously. It is as inspirational as it is entertaining and presents a platform for success with ethnically diverse movie casts that will shatter all misconceptions. Even if you don’t normally like comic book movies, I urge you to give Black Panther your consideration. It is the type of film that comes around once a generation and will leave you so emotionally fulfilled you will be rushing to your local comic book store to follow more of the wonderful world of Wakanda and its brave warrior King!

If you liked Black Panther, try… 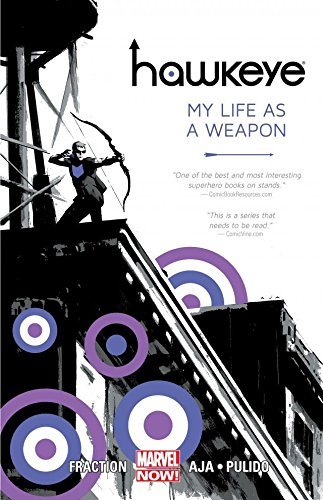 Hawkeye: My Life as a Weapon

Matt Fraction reminds me of one of those writers who if he wasn’t a comic book creator would have travelled the world in his younger years, licking frogs in the Amazon jungle searching for the meaning of life and then coming back to civilisation and realising the meaning of life is nothing and in nothing is everything. He has a knack for fleshing out characters and making them feel like they could be somebody that you may have known or even may share some qualities with.

Hawkeye: My Life as a Weapon should be retitled “my beautiful adventurous boring life as a superhero who isn’t really a superhero because I don’t have any powers”. A bit of a mouthful but true to form!

Like many heroes that have come from a particular period (60s Golden Age 70s Silver Age), only a few have what I consider to be an A-List status due to how long they have been around.

Hawkeye is very much that type of character and I know that this is meant to be something to read if you are yearning for more Black Panther – yes, I can see you’re currently scratching your head asking “how does this blond-haired, blue-eyed man have anything in common with the King of Wakanda” well let me explain:

The overall story revolves around what can best be described as “what does Hawkeye do on an average day?”. After purchasing a building to stave off some Russian gangsters, he also has to deal with tenants; tenants he not only has to protect but also make sure they have running water…. And let’s not forget the dog he accidentally adopts.

The running themes throughout this story arc are similar to Black Panther, friendship, family, responsibilities and choices that could make or break you. 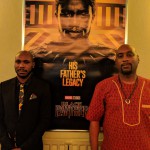 Woo Long Talks are Black, British and Nerdy! Two geeks who love nothing more than to talk about the Comics, Movies, TV and Games. Follow us on YouTube (Woo Long Talks) and Instagram (woo_long_talks)