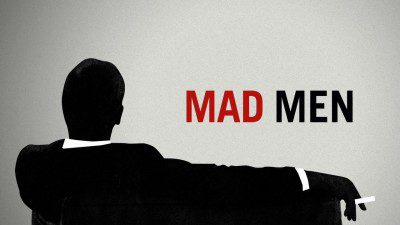 Posted on March 30, 2015 in Television with tags Reviews, Television

The final season of Mad Men premieres on 13 April. Today Hodderscape takes a quick look at what makes the show such a masterpiece.

Mad Men is a divisive show. I love it; my husband admires but doesn’t love it; I have friends who hate it.  There are viewers who embrace it unironically, who hold Don Draper and Roger Sterling up as enviable, imitable examples of manly men who get everything they want – and there are viewers who understand it as a dark, deeply unsettling commentary on the rotten core of the American Dream. We envy Don’s nervy cool, elegant wardrobe and lady-killing aesthetic as much as we chafe at his limitations and pity him for his shortcomings. The same is true for Roger, for Peggy, for Joan… (maybe not so much for Pete, though.)

The point of advertising is to make us think we can’t live without stuff we don’t need. That happiness is not only possible, but attainable – and affordable. The tension at the heart of Mad Men is the empty space between the dream of what we think we want and the reality of getting it. It’s easy to overlook Mad Men‘s essential darkness; it’s a slick, often very funny, beautifully written, beautifully acted, beautifully produced show that can be read and enjoyed entirely superficially. And that’s by design; creator Matthew Weiner specifically set out to create a story that could be sipped or guzzled. 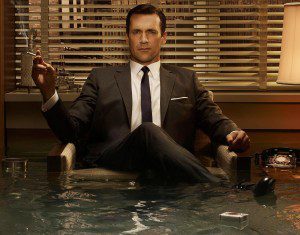 But enough of that. Here’s a collection of Mad Men stuff to see you through to the premiere:

The AV Club is running a Mad Men week. It’s worth checking back every day for new content, but today’s articles are great places to start.

Television without Pity may be gone, but the reviews (thankfully) remain. I believe that many of the early recaps of the show were written by John Ramos, one of the very best recappers on the site. It’s worth working through the archive because he – or whoever was recapping them, and I’m sorry I don’t remember anymore – did a fantastic job deconstructing the show’s densely layered imagery.

Definitely click on that link to the Paris Reveiw’s interview with Matthew Weiner above; it’s moderately spoilery but incredibly worth the read.

There’s a wealth of articles out there about the costumes on Mad Men; this is a fun one, here’s an interesting one, and here’s one of a million ‘how to dress like‘ articles.

The music of Mad Men is as central to its aesthetic as the costumes and settings; here’s a quick run-down of twelve great musical moments.

Speaking of musical moments, my personal favourite is #10 on this list.

But obviously we can’t talk about the music on Mad Men without talking about the opening sequence – and its Simpsons parody.

And finally: here’s how you make the perfect old fashioned. (Sip, don’t guzzle.)