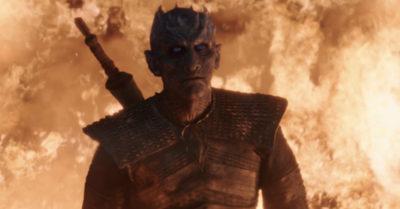 I know many people have their reservations and doubts, which I understand – but I thought this episode was up there with the best of the Game of Thrones TV series. It easily had some of the most emotionally-wrenching and chaotically immersive moments ever. Even without the major deaths everyone was expecting, I was deeply moved and shaken by the end, and can’t wait to see where on earth the next half of the final season will take us now the totally unexpected has happened. I have no idea what’s in store, which, in my opinion, makes things so much more exciting!

I have watched ‘The Long Night’ twice now and am still processing it. It worked on so many levels: as a spectacle (the sheer scale as well as the meticulous rendering of Winterfell), as a perfectly-paced creation of the multiple fronts of a battlefield, and as a hugely satisfying resolution of the struggle against the Dead.

It never felt long at 80 minutes, with all our favourite characters getting their star moments (RIP Lyanna Mormont) and a genuinely surprising end. Who knew that Arya’s arc as master assassin was going to bring her face to face with the Night King (well, Melisandre clearly)?

Any other surprises? That Melisandre would be quite so important and that quite so many of our favourites survived the battle to face the new challenges of the living. But as a friend of mine said ‘a bunch of leading actors and a few Unsullied don’t stand much chance against the Golden Company’ which is annoyingly true.

Honestly, I’m still not able to fully gather my thoughts and review last night’s Game of Thrones with any coherency, so bear with me. Suffice to say we had to pause it halfway through to make a cup of tea and have a breather, and there were one or two instances where my housemates and I quite literally screamed and clutched at each other for dear life. There were so many chilling moments I will never forget (seeing the Dothraki lights go out and feeling my heart sink to my stomach, and that sickening crunch as the wight giant pressed his thumb to Lyanna Mormont’s chest, to name just two) but I’m looking forward to re-watching when I’m feeling a little calmer. Highlights for me were Tyrion and Sansa’s moment behind the tomb (am now low-key shipping them, by the way), Sandor and Arya teaming up again, and obviously Arya’s moment of triumph. She is THE GREATEST and I am fervently hoping that she and Gendry end up ruling the Seven Kingdoms together because, truly, she is the queen we all deserve.

Where do I start? Hands down the best TV I have ever watched. Arya is the baddest b all of time and I aspire to be more like her. Jon left Sam to die! That is so unlike Jon! I’ve found it hard to be present at work today – mentally I’m still in Winterfell.

For the entire episode I was on the edge of the seat (partly from excitement and terror) but also because I couldn’t see what was going on! It was so hard to decipher what was happening in the darkness and snow storm. I get that this was probably the point, so you felt you were amongst the terror and confusion of the battle, but still it was quite hard to work out whether one of your favourite characters had just been killed. It was an epic battle but I did have to question their tactics sometimes (why didn’t they use the dragons more, why send people down to the crypt when you’re fighting someone who can raise the dead, and what was the point of Bran going into the crows? Couldn’t he have transported himself into the massive wight giant or something more useful instead? It was a great tense episode and I was on tenterhooks watching Arya creep around Winterfell. Arya was amazing (as always) and I also enjoyed seeing Dany swinging a sword. Grey Worm, The Red Woman, Jorah and Lyanna Mormont were all fantastic, compared to Bran and Sam who seemed a bit useless. Did Sam just sit down and start crying!? I was a little surprised that more main characters hadn’t been killed off – how did Jamie, Brienne and Pod all manage to survive whilst backed up against a wall? – but I’m happy that we get to see them all take on Cersei, unfortunately without the Dothraki or the Unsullied… gulp! All in all, I thought this was a great episode, even though I may need to rewatch it a few times to completely understand everything that went on.

Solidly epic, cinematic and dramatic so I enjoyed it greatly, BUT a surprising lack of death for an episode that is full of dead people walking.

PLUS, hiding in a CRYPT when your enemy can BRING PEOPLE BACK FROM THE DEAD? – Was that the most sensible decision?

And Jon, getting off your dragon in a field of dead people to chase after someone that can, I repeat, BRING PEOPLE BACK FORM THE DEAD – not the brightest idea?

Final summary: Arya is EPIC and Bran seriously needs to learn how to harness his power. ’

Wow!! Amazing episode. On the edge of my seat pretty much all the way through as everyone fought against all odds but mostly, Arya Stark blew my mind with her ninja like skills, another brilliant twist. How can there still be 3 episodes left?!

This is not what GoT used to be! The peril felt real and very cinematic at moments (all the lights blinking out in the gibbering darkness, having to stealth around a library full of zombies omg) but now you get to live if you’re virtuous/a main character?! I am outraged Greyworm is still here and if it turns out Bran has literally been flapping about in his mind not pulling some significant magic strings, I’ll be so unimpressed. I also minus Dany and Jon future-leader-points for their total lack of battle strategy (a good article on this is available at Wired).

Having said this, Melisandre has redeemed herself fully in my eyes, what with flaming swords, lighting the unlightable trench and pep talking Arya. Also, Arya, queen of my heart and inventor or our frequent future use of NOT TODAY in response to anything, with particular emphasis. Reading the responses online has also been a hoot. My favourite comments: 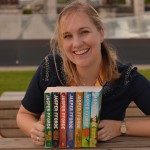