Posted on February 8, 2017 in Books with tags Extract

In a not so distant future, a Czech astronaut launches into space from a state owned potato field. Suddenly a world celebrity, Jakub’s marriage starts to fail as the weeks go by, and his sanity comes into question. 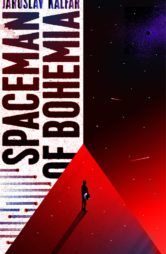 My name is Jakub Prochzka. This is a common name. My parents wanted a simple life for me, a life of good comradeship with my country and my neighbours, a life of service to a world united in socialism. Then the Iron Curtain tumbled with a dull thud and the bogeyman invaded my country with his consumer love and free markets.

Before I became an astronaut, the bogeyman and his new apostles asked if I’d like to change my name to something more exotic. More Western. Something befitting a hero.

I refused. I kept it as it was: common, simple.

Spring of 2018. On a warm April afternoon, the eyes of the Czech nation gazed from Petrín Hill as space shuttle JanHus1 launched from a state-owned potato field. The Czech Philharmonic Orchestra wafted the national hymn between the city’s Gothic towers, accompanying the countdown until, finally, the crowd gasped as the shuttle sucked and burned its cryogenic propellant and exploded upwards, all nine million kilograms of it, give or take the eighty kilograms of its single human inhabitant.

In a flash, JanHus1 branded the hundred spires of the city with a dove- like stencil. Citizens and tourists alike followed the shuttle on its spherical climb until at last it vanished in the sunrays, reduced to a shadow captured by a few sharpshooting camera lenses. Leaving  the vessel to its new fate in the heavens, the chattering citizens then descended Petrín Hill to quench their thirst for beer.

I witnessed my nation’s triumph on a flickering, soundless monitor. It took about an hour to get used to the vibrations of the seat savagely bruising my buttocks. One of the chest constraints had cut through my suit and into my areola, and I could not ease its grip. The launch chamber in which I sat was the size of a broom closet, a collection of phosphorescent screens, anorexic panels, and the spaceman’s throne. The machinery around me, unaware of its own existence, quietly carried me away from home, indifferent to my discomfort. My hands shook.

I had refused to drink water before the launch, despite the insistence of my handlers. My ascent was the fulfilment of an impossible dream, a spiritual experience that could not be matched. The purity of my mission would not be stained by such an undignified gesture of humanity as urine making its way into my Maximal Absorption Garment. On the screen before me, my people waved flags, clutched sweating bottles of Staropramen, traded koruna bills for plastic shuttles and spaceman figurines. I searched for the face of my wife, Lenka, hoping to catch one last glimpse of her sorrow, a reassurance that I was loved and feared for, and that our marriage could withstand my eight months of absence, or worse. Never mind that my throat was parched, that my tongue scraped along the rough flesh of my gums, that the muscles in my body tensed and cramped as every basic comfort of human existence disappeared mile by mile, sliced away by the layers of atmospheric divisions. I owned these moments of history. Schoolchildren would repeat my name for centuries to come, and a sculpture of my likeness would inevitably join the lineup at Prague’s wax museum. Already the billboards littering the horizons of Bohemia displayed my face looking upwards with practical gusto. Gossip magazines had suggested that I kept four mistresses and struggled with a gambling problem. Or that the mission  was fake and I was merely a computer-generated image voiced by an actor.

Dr. Kurák, my state-appointed therapist, had insisted that my launch would be filled with pure terror — a lone human being traveling to the unknown, living at the mercy of technology, indifferent and silent. I did not like Dr. Kurák. He stunk of pickles and was a pessimist disguising himself as a man with experience. He had been in charge of preparing my fragile psychology for the mission, but mostly he had taken notes on my fears (food poisoning; caterpillars; the existence of life after death, as in the possibility that life could not be escaped) with a ferocity that suggested he hoped to pen my official biography. He had recommended that during my ascent I consume my favourite childhood candies (Tatranky, layered wafers dipped in chocolate, which I’d stashed in the compartment to my left) and ponder my scientific duties to the world, the immense privilege I was honoured with, to bring the Czechs their greatest discoveries since Jan Evangelista Purkyne had recognised the individuality of fingerprints, or perhaps since Otto Wichterle had invented the soft contact lens. My imagination embraced these ego arousals, and into the silence of the chamber I began to whisper my Nobel Prize acceptance speech, until my thirst became unbearable. I violated my resolve and pressed the H2O switch, and the liquid flowed from the container underneath my seat to a straw attached to my shoulder. I was subject to my own physicality, a dwarf climbing a beanstalk to arm-wrestle the colossus, a cellular structure of banal needs for oxygen, for water, for the release of waste. Banish the dark thoughts, drink your water, I whispered as shots of adrenaline sharpened my senses and dulled the aches of my body.

Nearly a year and a half ago, a previously undiscovered comet had entered the Milky Way from the Canis Major galaxy and swept our solar system with a sandstorm of intergalactic cosmic dust. A cloud had formed between Venus and Earth, an unprecedented phenomenon named Chopra by its discoverers in New Delhi, and bathed Earth’s nights in purple zodiacal light, altering the sky we had known since the birth of man. The colour of the nighttime universe as observed from Earth was no longer black, and the cloud rested, perfectly static. It posed no immediate danger, but its stoic behaviour tantalised our imaginations with dreadful possibilities. Nations scrambled to plan missions that would allow them to capture the particles of the mysterious Chopra and study these microscopic pieces of worlds beyond our own for chemistry and signs of life. Four unmanned shuttles had been sent to test Chopra’s qualities and to carry samples back to Earth, but the probes had returned with empty bellies and no useful data, as if the cloud were a fata morgana, a collective dream of billions.

The next step was inevitable. We could not trust machines with the mission. A remote-controlled shuttle transporting German chimpanzee Gregor was dispatched to fly through the cloud and ensure that, with adequate protection, a human inhabitant could survive within Chopra long enough to observe and analyse samples manually.

Gregor had returned to his laboratory cage unharmed just as a new behaviour was observed in the cloud: it began to consume itself, the mass of its outer layers dissipating and vanishing inside the thicker core. Some spoke of antimatter, others assigned the cloud organic properties. The media offered speculations — which of the world’s governments would be brazen enough to send humans four months from Earth, toward a cosmic dust cloud of unknown and potentially lethal particles? Whispers, nothing but whispers from the Americans, the Russians, the Chinese, even the Germans, who had declared themselves the most serious about Chopra, given their offering of Gregor.

At last, an announcement came from a country of ten million, my country, the lands of Bohemia, Moravia, and Silesia. The Czechs  would fly to Chopra and claim the mysteries it held. I would be their champion, the one to bring home the fanfare of scientific glory. In the words of a poet drunk on absinthe, reprinted in every major newspaper the next day: “With JanHus1 lie our hopes of new sovereignty and prosperity, for we are now among the explorers of the universe. We look away from our past, in which we were claimed by others, in which our language was nearly eradicated, in which Europe covered its eyes and ears as its very heart was stolen and brutalised.

It is not only our science and technology traveling through this vacuum; it is our humanity, in the form of Jakub Procházka, the first spaceman of Bohemia, who will carry the soul of the republic to the stars. Today, we finally and absolutely claim ourselves as our own.”

As I prepared for the mission, my daily routines became public property. The street in front of the apartment building where Lenka and I lived was so littered with media vans, snacking journalists, photographers situating their elbows on cars like snipers, stray children looking for autographs, and general onlookers that the police had to put up barricades and redirect traffic. Gone were my lone walks around town, the quiet contemplation of which apple to choose at the market. I had been assigned a posse that trailed me everywhere, for safety (already unhinged letters from fans and would‑be lovers had flooded in) and assistance — helpers for grocery shopping, for fixing stray hairs on my head, for speaking. It wasn’t long until I couldn’t wait to leave Earth and, again, enjoy the simple luxury of solitude. Silence.

Now the silence was another unwelcome noise. I opened the snack compartment and bit into the Tatranky wafer. Too dry, a bit stale, tasting nothing like the childhood peace it was supposed to evoke. I needed to be elsewhere, in the comfort of a time I could understand, the life that had brought me to JanHus1. Existence runs on energy, a fluid movement forward, yet we never stop seeking the point of origin, the Big Bang that set us upon our inevitable course. I turned off the monitor broadcasting my nation’s festivities and closed my eyes. Somewhere in the deep circles of time colliding with memory, a clock ticked and tocked.

Spaceman of Bohemia launches 9th March 2017. Find out more about it here. 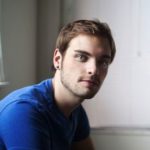 Jaroslav Kalfar was born and raised in Prague, Czech Republic, and immigrated to the United States at the age of fifteen, speaking little to no English at that time but learning it by watching Cartoon Network. He graduated from University of Central Fl …