Friday Favourites: Eurovision performances that all genre fans can appreciate 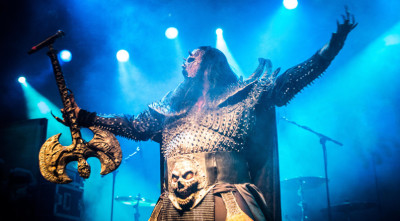 Posted on May 13, 2016 in Friday Favourites, Fun Stuff with tags

Operatic levitating vampires. Axe-wielding monstrous vikings. Wings. So many wings. Once a year Eurovision blesses us with weird and wonderful performances from across our great continent, and beyond.

Obviously I have not included any UK performances because we are an awful nation that does not treat Eurovision with the respect, creativity and displays of pyrotechnical ability that it deserves.

Accompanied, like all great vampires, by semi-nude balletic concubines. I unironically love this.

Verka Derduchka is a stage drag persona created by Ukrainian comedian Andriy Mykhailovych Danylko. She’s a flamboyant  railroad car operator, and this performance has more than a touch of steampunk disco to it.

Lordi, the axe-wielding monsters from Finland

The first hard rock band to win the contest, and boy did they do it in style (and a lot of leather). Each member of Lordi has their own monster character and these include, ‘The Biomechanic Man’, ‘The Mummified Pharaoah’ and, my personal favourite, ‘The Alien Man-Beast’.

Apparently this song symbolises that great theme of all epic fantasy, the eternal dialogue between Good and Evil.

Elnur Huseynov, the tortured hero probably about to be eaten by wolves

The blood moon rises. Our hero begins his lament. A pack of semi-naked dancers crawl on all fours pretending to be wolves.

Unfortunately, Elnur is about to be one-upped by a Belarusian performer who will (apparently) be performing naked, surrounded by live wolves this year. God bless Eurovision.