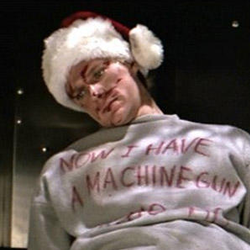 It’s almost Christmas! So, in a wild leap of imagination, the Hodderscape team are picking out their favourite Christmas movies and shows:

Obviously – I mean, obviously – my favourite Christmas film of all time is Die Hard. Would you believe I lived the first eighteen years of my life without seeing it? I mean, some of those years weren’t my fault; it didn’t come out till 1988. But that does mean that I wasted ten years that I could have spent watching Die Hard not watching Die Hard. I thought it was just another dumb action film, a la Lethal Weapon (which, actually, is also awesome; sorry, teenaged self, but you were wrong to discount the film just because you found Mel Gibson’s mullet so appalling). NOPE. I was so wrong. About everything. Die Hard is one of the greatest action films of all time, a blockbuster shoot-everyone-and-then-blow-everything-up made during that halcyon period when intelligent crime films (influenced by The French Connection and its ilk) overlapped with the action set-piece special effects extravaganzas of the late 80s and beyond. Die Hard, you see, has both intelligence and explosions. It also has Bruce Willis at his most charismatic and Alan Rickman at his most Alan Rickmaniest. Willis’ hero cop, John McClane, may look like a low-brow bruiser, but he’s as canny as the baddies… and yet, still a vulnerable meat-sack of a human being, who spends the film becoming increasingly battered and bruised.

All that and it’s set during the Christmas season. Fairy lights twinkle, carols shimmer across the soundtrack, and the hero scrawls ‘now I have a machine gun ho ho ho’ on a dead body (no doubt in his own blood). Forget the feel-good treacle of It’s a Wonderful Life or the irritating man-child humour of Elf: this holiday season, why not turn on Die Hard, kick off your shoes, wiggle your toes in the carpet, and quote the dialogue along with the film. Yippie-ki-yay, Father Christmas.

It’s a toss-up between Miracle on 34th Street and The Muppet Christmas Carol… Because it allows for better use of .gifs, I’m going to go for the latter! Highlights include Kermit as Bob Cratchit, Gonzo as Charles Dickens and, of course, Michael Caine as Scrooge. Special mention must also go to the ghosts of Jacob and Robert Marley for epic entertainment value:

It’s Christmas in Gotham City, and Batman, Catwoman and the Penguin are romping around an ice-encrusted set. Penguin and Catwoman have kidnapped the Ice Princess, an actress chosen to turn on the Gotham City Christmas Tree Lights. Said Princess dies. Christmas is not going well.

But all is saved! Batman defeats (or does he? Let’s not complicate things…) the Penguin and Catwoman and the film ends with Alfred and Batman exchanging Christmas wishes. So Batman essentially saves Christmas from the forces of darkness. Festive!

Michelle Pfeiffer is also disgustingly sexy in her turn as Catwoman – in an eat a live goldfish kind of way. 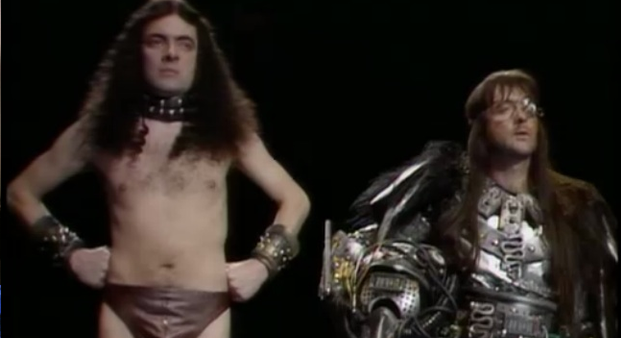 By far my favourite parody of Dickens’ A Christmas Carol in which rather than learn the error of his miserly way, Ebenezer Blackadder, the most generous man in England, learns that actually bad guys have all the fun and consequently becomes the ‘horridest man in the world’. Well if I had to choose between becoming commander and chief of the whole universe, or wearing Baldrick’s posing pouch, I know what I’d do!