Carole Stivers on the inspiration behind her post-apocalyptic novel, The Mother Code 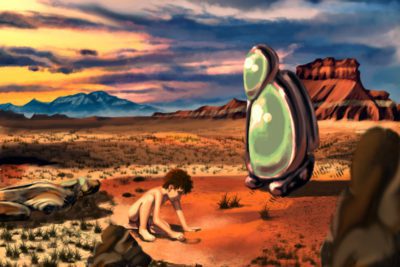 Posted on February 21, 2020 in Books, Science Fiction with tags The Mother Code

Carole Stivers talks about the inspiration behind her post-apocalyptic novel, The Mother Code.

Driving across the American desert Southwest one summer, I was struck with the idea of a child who rode inside of a super soldier-like robot with whom he shared a deep link, a child who somehow related to that robot as his mother. I was intrigued by the idea of placing him all alone, and of his search for his own origins and for those of his mother. How did they get there? Who made them? And why? These are universal questions, ones we all ask but don’t always expect an answer to. But in the case of my child, whose story it was my job to tell, I had to know.

First, I had to create a planet Earth that was natural except for the almost total lack of other human life. How did that happen? Rather than opening the story after the changes had all taken place, I wanted to take the reader through the apocalypse. And I wanted my apocalypse to be man-made—the product of a clever technology run amok. There are no “true villains” here. Everyone in the story is essentially well-meaning, their intentions thoroughly justified in their own minds. But the outcome of their actions results in their having to make compromises and choices that are morally challenging. This became the first part of my novel, which ended up reading more as a thriller: scientists working around the clock to avert the effects of a biological weapon gone wrong, their work resulting in the creation of my child and his mother.

Then, I had to create stakes for my child. What would he and his mother encounter in this new, empty world, that would threaten their existence? What might cause them both to face tough decisions? And what decisions would they make?

Through all of this, I wanted to portray a mother-child relationship and bond that is unique, and that evolves in unexpected ways. I found compelling the idea of preserving a mind through AI. I wanted to probe what it really means to be a mother, and a parent. And I wanted to portray the struggles of a child who must ultimately act on behalf of his parent—the real-life scenario, experienced by children young and old, of having to make decisions about the value of a parent’s life based on the status of his or her “brain.” This is the struggle that Kai must face. 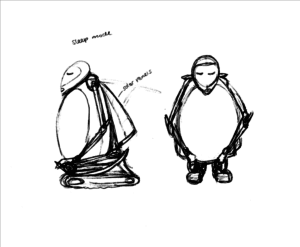 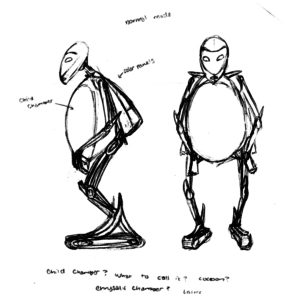 The ”Mothers” were invented at the kitchen table of my first beta reader, David Anderson, using elements from a box of discarded model airplane and computer parts. There Dave, who is a science fiction enthusiast and a licensed pilot as well as a computer systems manager, took us through the intricacies of STOL (short takeoff and landing) flight, and considerations regarding weight, dimensions and power source. Prior to our meeting with Dave, my daughter Jeannie, an artist, had drawn up some basic ideas on paper and added the articulated limbs. Images #1 and #2 were sketches that Jeannie had made before Dave told us that solar power would not be feasible, and that the Mothers would have to have ducted fans to allow for short takeoff and landing. 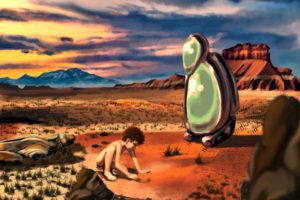 Image #3, which Jeannie also created prior to our kitchen table session, is dear to my heart. Because it was a digital file, this was the only image with a date: August 1, 2011. So, you can see how long ago this was! Again, the Mother shown here does not have all her necessary parts (for example, still no ducted fans). She has an unnecessary “head,” looks rather like EVE in the Pixar movie WALL-E, and is not large enough compared to her child (in my later notes, I noted that the Mother would have to be at least 15 feet tall at full height, with a wing span of at least 30 feet at full span—at rest, the wings would be folded in on themselves along her back, like a camera iris). 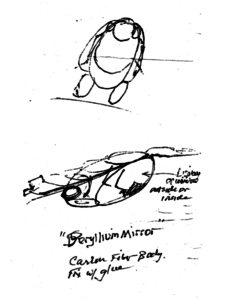 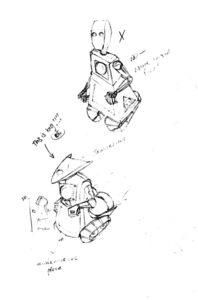 I’m fairly sure that images #4 and #5 are the sketches drawn by me and Jeannie, respectively, as we talked with Dave. They were the last drawings I could find.

None of these drawings really represent the final version, which right now exists only in my mind and in the story. For example, as mentioned above, I later decided that the Mothers should not have “heads”; I wanted to avoid any sort of “uncanny valley” humanoid appearance. One reason I really hope that a movie gets made, is that I will get to see how true masters will render my Mothers and bring them to life on the screen!

Some aspects of the Mothers are not so visible from the outside. For example, their modes of communication are key throughout the story. On drawing #4, I had scrawled something about a display on the hatch window—it was Dave’s idea that the window could go opaque and show a display for the benefit of the child. The Mother also needed a way to keep track of her child, and to sense his needs from a distance. I had already had the idea for the chip on each child’s forehead. In the novel, I explain the likeness between the child’s chip and the tefillin or phylactery; it was an ancient head-tefillah that I saw in a museum in Israel that made me think of the chip in the first place—a source of knowledge that a person could literally carry around on his forehead. It was only later that I meshed this with the idea of nonverbal communication, a two-way bond between Mother and child.

In all, though The Mother Code is dark at times, I wanted to write a story full of hope for the future. And I wanted to avoid the demonization of AI—something I’ve encountered all too often as an element in futuristic writing. Robots, in the end, are only what we make them! 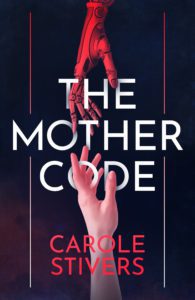 The Mother Code is available to pre-order now. 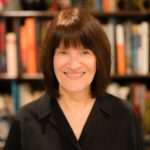 Carole Stivers was born in East Cleveland, Ohio. She received her Ph.D. in Biochemistry at the University of Illinois at Urbana-Champaign. She went on to post-doctoral work at Stanford University before launching a career in medical diagnostics. She now lives in California, where she's combined her love of writing and her fascination with the possibilities of science to create her first novel, The Mother Code.