Becky Chambers self-published her debut novel, The Long Way to a Small, Angry Planet, in July of last year. In the nine months since, she’s picked up a massive cult following, a traditional publishing deal (with us!) and major awards-shortlisting. Today she shares a few words of inspiration to anyone else out there with a dream.

There’s a person out there I’d like to talk to. I don’t know who you are, but I know you’ve got a thing. Maybe you’re a fellow writer. Maybe you sing, or build stuff, or bake pies. Whatever your thing is, it puts a spring in your step, gives you a sense of meaning (or maybe just contentment, which is equally important). It could even be a thing you’ve never tried before, but it’s been tugging at you for a while. Suffice it to say, you’ve got an itch, and you need to scratch it.

Some permutation of your thing has been rattling around your head for a long time. You’re aching to make it happen, but you haven’t yet. You’ve thought of a thousand reasons why you can’t — or shouldn’t — and you’re sure it’s a stupid idea in the first place. But it won’t leave you alone, that pesky thing. Wracked with indecision, you’ve placed the matter in the hands of…whoever. The universe, let’s say. You’re waiting for a sign, a big cosmic quest marker giving you the go-ahead to make that thing.

Go ahead. Make that thing.

I needed an external thumbs-up, too, a few years ago. I had started writing a book, but I didn’t think it was anything anybody would ever want to read. When life got in the way of me being able to keep writing, I had to make a choice. I could either find a way to keep the book going, or focus my attention elsewhere. I was leaning hard toward throwing in the towel, but I decided to give it one last shot. I started a Kickstarter campaign to fund my writing time, and I made an agreement with myself: If the campaign wasn’t successful, I had to take the hint and go do something else.

That wasn’t how it went down. People did want me to make that thing, and because of that, I’m here at Hodderscape now, and it’s all very cool. None of that would’ve happened if it weren’t for a posse of strangers giving me a nudge.

Go make your thing, even if you have no idea how to get started, even if you have no idea where it will take you. My bet is it’ll be somewhere pretty great. That’s true even if this particular thing doesn’t quite work out. At the very, very least, it’ll teach you something that will help you make the next thing, and the thing after that, and so on and so on, until you’re standing atop a giant glorious pile of things the world has never seen before — some broke and busted, others pure gold, all wholly yours.

So submit that manuscript. Record that song. Construct that cosplay. Bake the most daring pie of all time (and save me a slice, please). Do your thing. Nobody else can do it for you. I may not know who you are, but I know you can do it. You’ve got your sign. Take it and run. 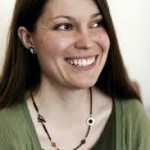 Becky Chambers writes science fiction and essays about popular culture. The Long Way to a Small, Angry Planet is her first novel. She lives with her partner in Northern California.