Some of the scariest horror out there is ambiguous and subtle, creeping you out with lingering unanswered questions. And then there are what we might call creature features – gloriously gross, sensationally shabby, no-holds-barred celebrations of (wo)man vs. nature. But today’s creature features can have finesse too.  It just takes a little time and patience to search out the really good ones from the wonderful mess of low-budget space aliens and post-atomic giant termites (and tornado-borne sharks) crowding your Netflix queue.

(Warning: spoilers for everything!)

For the first-time viewer: JAWS (1975) is the classic creature feature, as well as a damn good movie.  And it’s a great introduction to the genre because it’s so subtle.  It takes forever for the shark to make its first appearance–famously due to the fact that the special effects crew was having a hard time with the robots.  Spielberg and his team suffered through twelve-hour shipboard days to capture the film’s now-iconic shots of fishing floats racing through the waves, swimmers yanked around by invisible teeth, and that big dorsal fin slicing the water.  But when Bruce finally does emerge from the deep, he’s a true nightmare.  Together with great cast chemistry, a tight script, and some great ad libs (“You’re gonna need a bigger boat,”) it all came together into one of the scariest man-vs-nature movies of all time.

For the strong of stomach:  John Carpenter’s 1982 version of The Thing, drawing from both the 1951 Howard Hawks film The Thing From Another World and John W. Campbell Jr.’s novella Who Goes There? is a creature feature for audiences who don’t mind a little splash with their scares.  This is the creature to end all features–a shape-shifting, protoplasmodic alien that gobbles up other life forms by infecting them with a single cell of its own.  The Thing can look like a perfect copy of any living thing…when it’s not busting out in whipping tentacles, slimy appendages, and toothy maws.  There are some really goopy scenes in this one, balanced by wonderfully severe, composed shots of the Antarctic research station where it all goes down.  And underneath it all, it’s a sly takedown of American cold-war paranoia, race, identity politics, and our rigid notions of masculinity.  (The 2011 prequel, starring Mary Elizabeth Winstead, is sadly nowhere near as sharp.)

For the high-minded:  Sometimes a creature feature is also a thoughtful, moving character drama about a wounded family.  That’s the case with Bong Joon-Ho’s 2006 movie The Host (please note: not the Stephenie Meyer vehicle of the same name.)  Creature features have always had strong Asian roots–anyone heard of Godzilla?–and Bong takes the tradition and runs.  His monster is an oversized mutant frogspawn from the Han River in central Seoul–the product of a massive, willful formaldehyde dump by occupying Americans in the 1950s.  After crawling out of the river it runs smack into the Park family, gulping down their youngest member Hyun-seo and stashing her in the sewer tunnels for later consumption.  The movie follows the Park family’s tragicomic efforts to rescue Hyun-seo and slay the beast.  The visual effects are thoughtful (and slimy), the acting is superb, and this movie holds the title for Most Emotionally Moving Scene Set in a Dark Trailer Full of Ramen.

For the creature-averse:  If none of the other movies in this list work for you, maybe you need a creature feature that leaves out the creatures almost completely.  In that case, try Gareth Edwards’s low-budget Monsters (2010), or at least the first three-quarters of it.  Set in Mexico after the crash-landing of a deep-space probe, the appearance of a plague of tentacled alien beasties, and the subsequent quarantine of the country, Monsters has more on its mind than just creatures.  The story follows Andrew Kaulder, an American photojournalist trying to hustle Samantha, his American charge, back across the buttoned-up border.  Mexico has become a combination war zone and toxic wasteland around them, making leaky gas masks, missing visa papers, and ruptured train tracks even scarier than their eventual meet-ups with monsters.  Shot on digital video and edited on a laptop, Monsters has a gritty, grainy, real-life feel.  And like JAWS, Monsters keeps its beasties offstage for most of the movie, both for budget reasons and to build suspense.  It works. 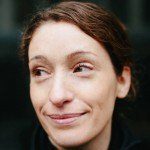 Karen Munro lives and writes in Portland, OR. Every October she sends out a scary story a day to interested readers. Find out more at http://munrovian.tumblr.com