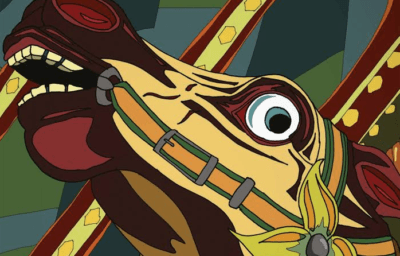 Posted on October 20, 2016 in Books, Throwback Thursday with tags Horror

If you are inspired by Halloween to read something creepy with a cast of a hundred carnival clowns and freaks, look no further than Bradbury’s 1962 horror fantasy masterpiece.

Something Wicked is the story of what happens when Cooger and Dark’s Pandemonium Shadow Show comes in the autumn to a small town in Illinois – as it has, it transpires, with disastrous effect every two or three decades for a century or more. And when these ‘autumn people’ come there is no summer: ‘for these beings, fall is the ever normal season, the only weather, there be no choice beyond. Where do they come from? The dust. Where do they go? The grave. Does blood stir their veins? No: the night wind. What ticks in their head? The worm…’

Bradbury’s writing career was kick-started by a series of conversations with a real life carnival magician, Mr Electrico, in Illinois when he was 12. When Mr Electrico told the impressionable Bradbury that he was a reincarnation of a friend who had died in his arms after a battle in the First World War, it opened the creative floodgates to the author’s imagination. Over many years, via short stories and a screenplay, the result of this encounter turned into one of the most acclaimed horror novels of the last century, praised by Stephen King as Bradbury’s best book in Danse Macabre, King’s seminal non-fiction book on horror in popular culture in which Bradbury is one of the co-dedicatees.

The gifts that Bradbury brings to the reader are manifold. In terms of the imaginative creation it is nonpareil. We have the eponymous Mr Dark, an ‘Illustrated Man’ who magically holds the souls of the hundreds of freaks who serve him in the tattoos which cover his body; there is the mirror maze that shows its victims a hundred thousand images of their giant, crone-like future selves; and, best of all, there is the carousel which, depending on whether it revolves forward or back, accelerates or decelerates the ageing process of those who ride it. The scene in which the young heroes, Will and Jim, set the machine and the villainous Mr Cooger hurtling forward until he becomes a two-hundred-year husk is, in my opinion, one of the greatest in horror.

Then the book has ‘big themes’: the battle between good and evil epitomised by the sweet reasonableness of Will, counterbalanced by the Dionysian madness of his best friend Jim who is drawn towards destruction by the blandishments of Mr Dark. And then there is the life-affirming message of the denouement where Will’s father, Charles, defeats evil with, literally, laughter.

But what lasts longest in the memory is what King calls Bradbury’s ‘dreaming, semi-poetic prose’, sometimes overdone but on other occasions brilliant. The startling, sinister opening of the book: ‘The seller of lightning rods arrived just ahead of the storm. He came along the street of Green Town Illinois, in the late cloudy October day, sneaking glances over his shoulder. Somewhere not so far back, vast lightings stomped the earth. Somewhere, a storm like a great beast with terrible teeth could not be denied.’

Or, signing off, the sound of the train whistle that announces the arrival of the carnival at 3.00am, a passage that King pulls out for particular praise:

‘The wails of a lifetime were gathered in it from other nights in other slumbering years; the howl of moon-dreamed dogs, the seep of river-cold winds through January porch screens which stopped the blood, a thousand fire sirens weeping, or worse! The outgone shreds of breath, the protests of a billion people dead or dying, not wanting to be dead, their groans, their sighs, burst over the earth!’ 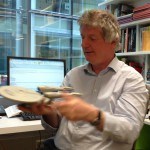 One comment on “Throwback Thursday: Something Wicked by Ray Bradbury”