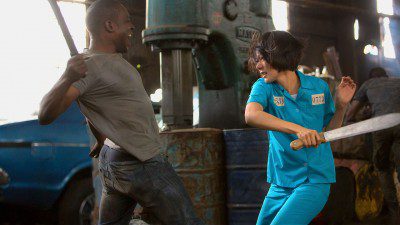 Posted on August 28, 2015 in Books, Friday Favourites, Television with tags

This month we had a whale of a time (probably a sparkly space whale that breathes fire) at Nine Worlds and Fantasy in the Court, but as well as hanging out with actual people we’ve been retreating to our caves to enjoy some awesome TV shows and books. Here are the best things we read and watched this month.

What’s the best thing you read or watched this month? Share the joy and tell us in the comments! 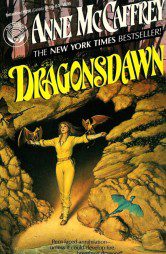 Probably inspired by my post about the Dragonsong/Dragonsinger covers I picked up a copy of Dragonsdawn, the first* Pern book, last weekend and reread it. McCaffrey’s Pern series, if you’re not familiar with it, takes place in a distant future. A group of colonists move to an apparently bucolic planet, Pern, and start rebuilding society – until an odd, moon-like object in an irregular orbit around the solar system comes too close and starts dropping ‘thread’ on the planet. Thread are gross, insatiably hungry worm-like fungus that destroy anything organic in their path, including our colonists. Naturally, the colonists (whose tech supplies are dwindling) turn to genetic engineering and whip up some proper dragons from the local flying lizard population to aid them in their fight against the airborn menace. Before long, Pern society switches from science fictional to fantastical, with people living in holds and keeps and flying around on dragons.

It’s a fun conceit, and I enjoyed rereading the novel, though it does show its age a bit: the society McCaffery depicts is carefully ungendered, although a little unexamined gender essentialism does slip in around the edges. It’s similarly free of organized religion, and faith and belief never even arise in conversation – both decisions feel like  the previous generation of SF writers’ attempts to imagine a ‘better’ society without taking actual people into account, or anticipating the way the current conversations about these topics might sound in later decades. But it’s a small gripe, one that’s primarily interesting in anthropological and sociological terms, rather than a dig against the book, which is exciting, readable and lots of fun.

*First in the sense that it’s the novel about the colonization of Pern, making it first in the series’ internal chronology, but was published in 1988, (twenty years after the first Pern novel). 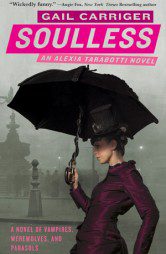 Friends don’t let friends miss out on sexy werewolves. That’s a policy we strictly enforce at Hodderscape. So, Anne did her duty and instructed me to read Gail Carriger’s Soulless. I dutifully obeyed, and loved it.

It’s the first book in the Parasol Protectorate series, an alternate history version of Victorian England where werewolves and vampires are accepted as functioning members of society – but not without a few hiccups.

Now, more about sexy werewolves. The sexy werewolf in question is Lord Conall Maccon, an Alpha (naturally) who struts across the pages looking ‘vaguely magnificent’ and occasionally growling. Sexily. Because he’s a werewolf his courting methods are unorthodox, but mainly in a sexy way so it doesn’t matter too much.

Now, I’m not completely shallow. As well as containing a sexy werewolf, Soulless has an awesome leading lady in Alexia Tarabotti – a sassy spinster who does not suffer fools gladly and kills a vampire with her parasol in the first chapter. Queen.

Oh, and there’s 4 more books in the series. I’ll just be over here. Thinking about sexy werewolves. 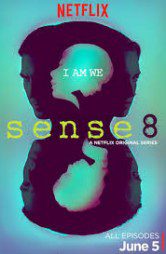 You know how it is – you’ve exhausted your usual go-tos on Netflix (perennial watch: Buffy; current obsession: Bojack Horseman) and you’re on the hunt for something new. Scrolling through Netflix’s recommendations can be like Russian roulette – no, I do not want to watch The Rewrite with Hugh Grant – but what’s this? Sense8? The premise is that eight strangers around the world are suddenly linked, and can communicate with each other. But it’s so much more than that, and you should watch it. If you like your sci-fi full of humour, well-choreographed fight scenes, raunchiness, and heavy on inclusion – expect lots of LGBT and POC representation – then give Sense8 a whirl. The Wachowskis have definitely made up for subjecting Jupiter Ascending to the world. 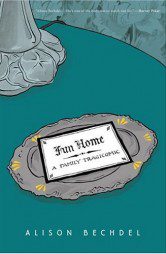 The subtitle of this genius graphic novel is ‘A Family Tragicomic’, and that’s exactly what it is. A beautiful, nuanced and darkly funny memoir, telling the story of the author’s complicated relationship with her father – English teacher, funeral director and closeted homosexual – as she comes to terms with her own sexuality. Already a cult classic, it’s now been turned into a Tony-winning musical, which I for one am dying to see (yes, I do have to bring musical theatre into every post I write). And, as Fleur pointed out to me, author Alison Bechdel is the inventor of the Bechdel test, which makes her even more awesome. 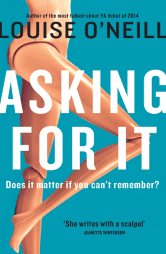 Asking For It by Louise O’Neill

The best thing I have read this month is Asking For It by Louise O’Neill.  I had seen a lot of noise about Louise on Twitter so thought I would give her latest book a go and was completely blown away.  It is such an excellent book about the ongoing issue of how women dress and whether wearing a short skirt and heels means you are “asking for it” (which of course it does not!).   It’s written really well and had me completely gripped! I am now reading her first book Only Ever Yours which is also amazing and again deals with women’s issues.  I’d recommend any one read either/both of these books – they’re truly fab!