Posted on December 25, 2015 in Friday Favourites, Hodderscape Advent with tags

Here are team Hodderscape’s favourite things of 2015. Deciding these was brutal – like Hunger Games, but bloodier.

Book: I finally got round to T.H. White’s The Once and Future King; my dinner party embarrassment book and the source of geek humiliation for many a year. Not what I was expecting at all. Merlin travelling BACK through time is a marvellous idea.

Film: Mad Max: Fury Road. Sheer futuristic apocalyptic road rage  and kick ass action, this was a mainline adrenaline shot, and the frame rate was overcranked in the first few minutes in the cinema so the action was even more manic than it was meant to be.   Of course, The Force Awakens may BECOME my favourite film, but let’s not tempt fate….

Television: Daredevil. The first of the Netflix Marvel adaptations is my idea of perfect TV. Beautifully lensed, scripted and acted, shot through with violence, moral ambivalence; possibly the finest Marvel franchise theatrical adaptation EVER IMO.

Video Game: If your idea of fun is being mauled to death by a grizzly bear in an icy culvert, The Long Dark is the game for you. The sandbox version will pitch you into a post-apocalyptic winter wonderland which may compensate if there’s no White Christmas.

Foodstuff: Pimento Cheese Spread. ‘The caviar of the American  South.’ I discovered this ambrosia on my summer holidays. Cheese and mayonnaise! I pine for it.

Film: Jupiter Ascending. I loved this nonsensical outlandish space opera about a secret space princess who can control bees and also Channing Tatum is a dog-man and there are flying dinosaur baddies and Eddie Redmayne won an Oscar but also is in this movie. I wrote a review comparing it to a donut.

Television: Miss Fisher’s Murder Mysteries. The clothes and the shoes and the cars and the jewellery and the very silly mysteries and the anachronistic progressiveness and Phryne’s incredible hair, like woah, and also OMG WHEN ARE PHYRNE AND JACK JUST GOING TO KISS ALREADYYYYYYY

Book: In all seriousness, my favourite (non-Hodder, of course!) book to publish this year was Uprooted. There’s action, adventure, romance, a kick-ass heroine to root for, a friendship between two women that is totally genuine and wonderful, and it’s beautifully written. LOVE.

Television: Daredevil was great; Jessica Jones is brilliant. It’s not just a superhero tv show about an alcoholic super-strong lady PI – it’s a dark and, at times, incredibly painful interrogation of what it means to be a woman in what remains very much a man’s world.

Book: I’m going to bypass Hodderscape books (because choosing between those would just be evil), and say Uprooted. Trees, magic, a stern man wearing tight black velvet, a bad ass heroine, more trees – this is everything I want from a novel.

Film: My walk back home hasn’t been the same since watching It Follows. Possibly because I listen to the John Cage-esque soundtrack at least once a week (pro tip: don’t do this when walking home in the dark), but also because this is one of the creepiest horror films I’ve ever watched.

Comic: There have been some fantastic epic fantasy comics of late, and Monstress is the jewel in the crown. It’s about a girl with a psychic link to a monster which gives her both TERRIBLE power and TERRIBLE responsibility. Sana Takeda’s art is incredible, and I urger everyone to read/gaze upon this commic.

Book: The Martian. The movie was good too but I really enjoyed the book. It develops his character a lot more and you get to marvel at his problem solving when things look beyond bleak, and he’s actually bloody funny in the face of such dire straits.

Movie: Jurassic World. I love a good creature feature, and this didn’t disappoint. I was quite distracted however by the leading lady’s ability to leg it through such rough terrain with stilettos on. All I could think while watching it was ‘is she still wearing those shoes?!’ And yes, she was, right to the end. A Chris Pratt was supposed to be the tough one – bet he couldn’t do that.

Television: I don’t think I picked up any new TV shows in 2015, but continued with The Walking Dead so needs a mention. NO SPOILERS PLEASE… I haven’t even watched the end of mid-season finale yet, but have loved the theme so far, that being 1) Rick is a badass and Carole is SERIOUSY scary.

Music: It kind of counts as ‘horror’ I suppose, but in 2015 I was mainly chuffed that Disturbed reformed and released Immortalized. 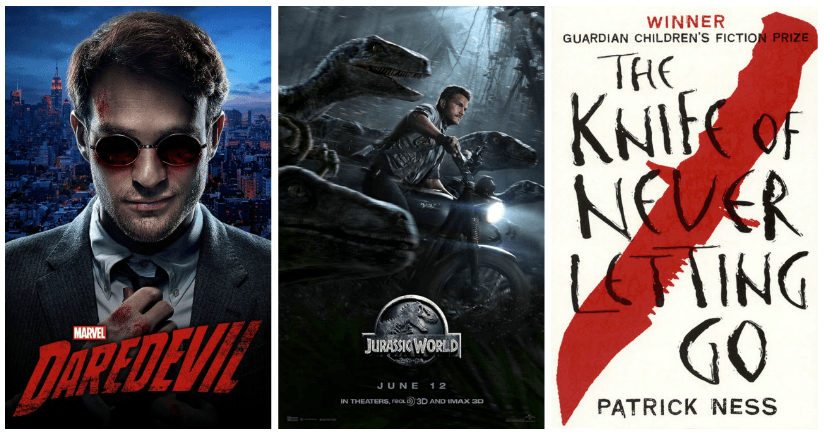 Book: I loved Patrick Ness this year. I discovered the Chaos Walking Trilogy, and have saved the third book for a day where I really just need to sit down and read something amazing. Oh, and to top it off I also read A Monster Calls – fantastic.

Film: Jurassic World was my favourite thing ever. Exaggeration? Maybe. But it was so much fun to watch. Dinosaurs, check. Chris Pratt, check. Raptor bros, check. Top notch.

Television: I actually can’t decide on this so I’m going to go with Daredevil – it was dark, gritty, violent and had amazing acting (looking at you Vincent D’Onofrio). Plus, the intro is awesome.

Games: I played Alien Isolation this year and it was pretty scary. I didn’t do any jumping or screaming, but there was definitely an increased heartrate. 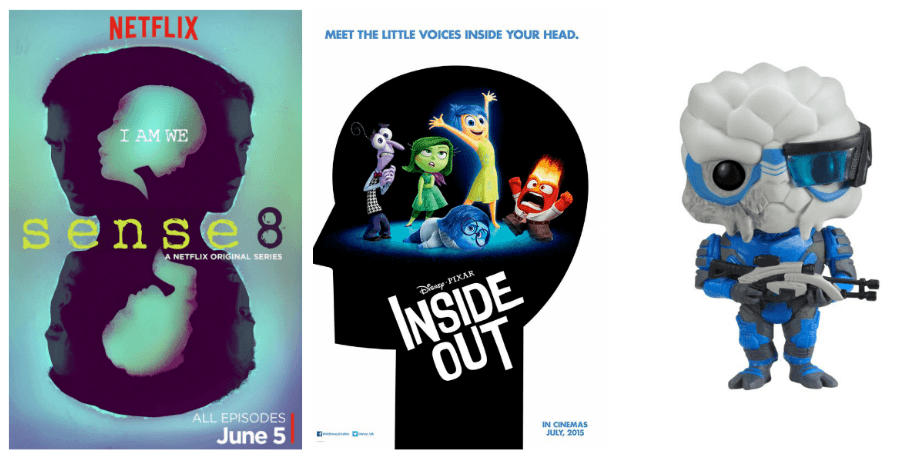 Book: I’ve read lots of brilliant books this year, but my number one choice has to be The Long Way to a Small, Angry Planet. This book truly has it all – interplanetary politics, a piece of junk spacecraft, wonderfully realistic, yet adventurous, characters, a ton of humour and poignancy in places, and the most beautiful book jacket I’ve seen this year.

Film: I’m reserving judgment for the new Star Wars, which might leave my current choice bruised and battered in second place, but my favourite of 2015 so far is Inside Out. Never would I have ever thought I would be picking a Pixar film as my fave, but I guess stranger things have happened. I’m mainly picking this because I am an absolute sucker for unexpected sadness in films; just as I found myself utterly devastated in the first ten minutes of Up, I found myself bawling when Bing Bong *spoiler alert* sacrificed himself for the greater good. Goodnight, sweet prince.

Television: Sense8 was an amazingly-innovative series about eight strangers with a connection to each other. Shot in several different locations worldwide, this was TV drama on a huge scale. By the end of the series, you ended up with several favourite characters – Wolfgang and Sun, for me – and it was almost impossible to predict where it was going to go. Worth watching for the orchestra scene alone.

Nerd gift: is my Garrus Pop! Vinyl. Close second is the zbox, a monthly subscription service that brings awesome geeky gifts right to your door.