Introducing The Book of Phoenix

Nnedi Okorafor’s newest novel, The Book of Phoenix, publishes today. After the jump we investigate how it connects with her award-winning novel Who Fears Death, and introduce you to the unforgettable Phoenix.

Although she’d been writing for some time beforehand, Nnedi Okorafor burst onto the international genre scene in 2010 with Who Fears Death, her first adult novel, which won 2011’s World Fantasy Award. A book for which the word ‘ferocious’ has never been more apt, Who Fears Death is an immensely powerful, angry, energetic, unforgettable story about a young woman born in tragedy and violence, whose quest to defeat her evil father by magical means will change the world. Like the best science fiction, Who Fears Death is set in a distant future but deals with current, topical issues, from weaponized rape to female genital mutilation – none of them easy subjects to consider. But Okorafor’s writing carries the reader through the most difficult passages, leaving us to reel with joy in the skies above the desert alongside shapeshifting protagonist Onyesonwu (her name means ‘who fears death’), who loves to take the form of the vulture when she needs to think, and to feel free.

All of Nnedi’s writing sings with the same, undeniable energy of Who Fears Death, and we’re incredibly proud to publish her here in the UK, first with last year’s Lagoon and today with The Book of Phoenix, a stand-alone prequel setting up the events of Who Fears Death. (Don’t worry; you don’t have to read the one to enjoy the other!) 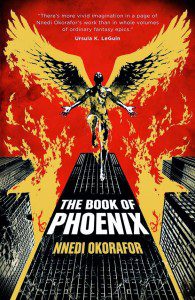 They call her many things – a research project, a test-subject, a specimen. An abomination.

But she calls herself Phoenix, an ‘accelerated woman’ – a genetic experiment grown and raised in Manhattan’s famous Tower 7, the only home she has ever known. Although she’s only two years old, Phoenix has the body and mind of an adult – and powers beyond imagining. Phoenix is an innocent, happy to live quietly in Tower 7, reading voraciously and basking in the love of Saeed, another biologically altered human.

Until the night that Saeed witnesses something so terrible that he takes his own life. Devastated, Phoenix begins to search for answers – only to discover that everything that she has ever known is a lie.

And it’s time for Phoenix to spread her wings and rise.

In The Book of Phoenix you’ll meet Phoenix, a glorious, genetically altered woman who, though only two years old, had the mind and body of an adult woman – and an adult woman’s need to find her place in the world, to right wrongs and, occasionally, to revenge ills. Like her namesake, Phoenix has wings, can set things on fire with a single touch… and shares a few other characteristics with the mythological beast, as well. In the tradition of remarkable heroines throughout literature, Phoenix is not content to sit idly by and let her fate be decided for her. Phoenix is going to write her own future, her own destiny… and so she does, in The Book of Phoenix.

The Book of Phoenix publishes today! (Featuring glorious art by Eric J. Battle and another gorgeous cover by Joey Hi-Fi!)

2 comments on “Introducing The Book of Phoenix”