We all wish we could go travelling through time (read: hang out with cool dinosaurs), but unfortunately time travel is but a dream. Luckily, we do have the next best thing: books. Yesterday we published the first book in Scott K. Andrews’ time travel trilogy, TimeBomb, in paperback. So for this week’s Friday Favourites we’re getting into the time travel spirit and sharing our favourite time travel stories. 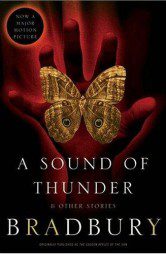 A Sound of Thunder by Ray Bradbury

This, the most reprinted of all science-fiction stories and the origin of the term ‘the butterfly effect’, is a cautionary tale about time travel, tourism and shooting dinosaurs.  It’s  2055 and Time Safari Inc. offer wealthy big game hunters the chance to hunt extinct species. Our ‘hero’ Eckels want to bag a T.rex in the late Cretaceous Era. On arriving in the distant past he’s warned by Travis, the hunting guide, to minimise his interaction with the environment. Forward scouts have identified and preselected a T.rex already doomed to die through natural causes. Any other activity but the zapping of the giant lizard may create a disastrous snowball effect on the future. Heavy fines and worse are threatened for any transgression. But when the giant reptile hoves into  view, Eckels panics, steps off the especially prepared elevating path and runs into the forest

On return to 2055 he discovers a crushed butterfly on the sole of his boot. Even this small event has had a ripple effect on the present. Subtle and not-so-subtle  changes have occurred: the president is not the moderate who won the election  on the day of Eckels’ departure, but a neo-Nazi. There are other changes, all to the bad. In a fit of anger Travis shoots Eckels. Fade to Black. 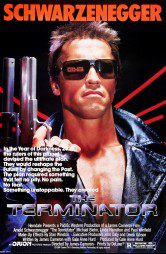 Though the very best time travel movie ever is Star Trek 4: The One with the Whales – that’s the one where they have to go back in time to save the whales because it was the 80s and that was a thing? And so they slingshot around the sun and that sends them back to 1986 San Francisco, and Checkov keeps saying ‘nuclear wessles’ and we learn Spock doesn’t like punks with boomboxes on public transportation. Now, obviously, that’s both the best time travel movie and the best movie of all time, full-stop, except for maybe Star Trek 2: KHAAAAAAAAAAAAAAAAAN.

All that aside, the other best time travel movie out there simply must be The Terminator, the 1984 James Cameron/Arnold Schwarzenegger extravaganza that, when we’re being honest with ourselves, is based on a really stupid premise. You see, it’s like this: software program develops AI and, by 1999, the robots have nuked most of humanity and taken over. But there’s a human uprising, led by a dude called John Connor, whom the robots just can’t kill. So they come up with a great idea – send a robot who can pass as human back in time to kill Connor’s mother before she has him. But instead of sending the terminator robot to, like 1970, when Sarah Connor is a helpless kid, they send her to 1984, when she’s a fully functioning – and secretly totally kick-ass – adult. Connor sends a human back to help her out who, spoiler, ends up being the dude who impregnates her. Complicated!  Anyway, The Terminator is one of the first recognisably modern summer blockbusters, helping to create an action movie formula that summer blockbusters still follow today. Add in some iconic performances and the first on-screen appearance of one of modern cinema’s great female characters and boom: modern classic.

Let’s all go watch it again this weekend before Termynator: Danerys Targaryan destroys the last vestiges of affection we feel for the franchise. 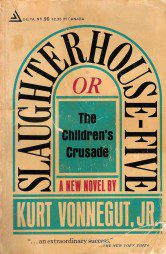 For those who don’t know the story, Slaughterhouse Five is the account of Billy Pilgrim, a soldier who has become ‘unstuck in time’. On his daughter’s wedding night he is abducted by aliens, taken to a planet called Tralfamadore and kept in a human zoo. Tralfamadorians see in the fourth dimension, which allows them to see every point across the space-time continuum – so they have a pretty fatalistic view on things. Which accounts for the book’s famous refrain ‘so it goes’.

The book adopts the Tralfamadorian perspective on things as it jumps between various points in Billy’s life, most memorably the Dresden bombing which Vonnegut himself was witness to. Moments of incalculable loss and meaningless destruction are followed by the narrator robotically repeating ‘so it goes’.  Which is far more powerful and affecting than chapters lamenting the futility of war.

Like many people this was the first Vonnegut I read, and straight after I gobbled up every Vonnegut I could get my hands on. Vonnegut’s writing is simultaneously bitingly satirical and tear-inducingly sweet and poignant, and Slaughterhouse Five is one of the most touching accounts of war ever written. 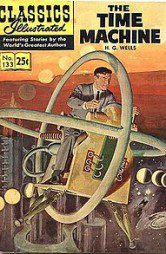 The Time Machine by H.G Wells

I watched the movie before I read the book, which is a backwards way of doing things I know and if I could go back in time and change that obviously I would. I remember watching it one Sunday afternoon with my dad when I was quite young and enjoying the novelty of it not being a western. That was also when he told me about how my grandfather had been a sci-fi nut and wondered aloud if he would have like the movie.

I remember the ‘Time Traveller’ in his time machine and watching time speed up and slow down at a rate that would have taken him years just to get back to his own childhood let alone the stone age.

‘It looks like something Elton John would drive through the Everglades’ – Penny, The Big Bang Theory

When I came to read the book though I didn’t picture the movie, as one so often does if you do your book/movie mix the wrong way around. The Morlocks were very different in my head, and more creepy.

An excellent concept and insightful thought experiment into the ways civilisation, and these fictional species, could have evolved in tandem.