Friday Favourites: things we read and watched in March 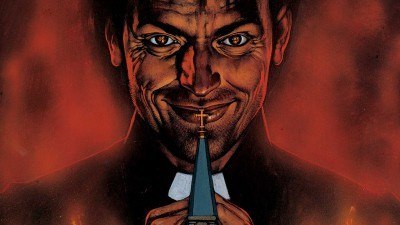 Posted on March 25, 2016 in Friday Favourites with tags

From superheroes to super creepy monsters, here are the best things Team Hodderscape read and watched in March. 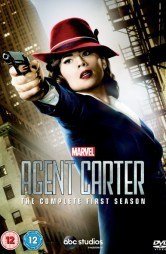 Possibly (in fact, almost certainly) my favourite of the Marvel properties, Agent Carter features basically everything I want in a tv show: a stylish retro setting (for the second season, the show traded New York for Los Angeles), whiz-bang atomic-age science (which I think we can comfortably call ‘Science!’ and leave it at that), good looking men (and lots of them), a solid sense of humour and, most importantly, a totally kick-ass heroine. Hayley Atwell’s Peggy Carter is the best, you guys. She’s smart, she’s funny, she’s got a mean right hook, and she hates talking about her feelings. Everyone on Agent Carter is basically in love with Peggy, as they should be. I’m basically in love with her. She’s so great. So great.

Anyway, moving the show to Los Angeles was a solid move for its second season, which is chock full of good looking men, Science!, humour and Peggy Carter’s mean right hook. Also palm trees, deserts and a flamingo. There are more female characters than in season 1, and Peggy’s friendship with Jarvis is strengthened and deepened – which is especially admirable given that one of the season’s new characters is his wife, Ana Jarvis, who is basically also the best. There’s also a musical sequence, a swirling floating ball of black ooze, a hover car and a lot of kissing. The show goes out on a great (and frustrating) note; if there isn’t going to be a third season – and that’s sadly more likely than not – then at least it went out on a high note. Literally. 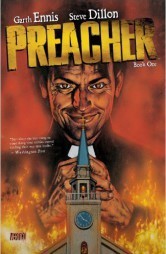 Preacher: Book One by Garth Ellis and Steven Dillon

As soon as I saw the television trailer for Preacher I knew I couldn’t wait until May to get more. A wayward preacher. An Irish vampire. Texan accents. I ordered the comics immediately.

And so I began the rip-roaring road trip across America that is Preacher. It begins when disillusion Texan preacher Jesse Custer acquires a mysterious power from upon high: ‘the word’. ‘The word’ gives him the ability to make people do whatever he wants. Rather convenient. Of course, with great power comes great big enemies who want to take it from you. Accompanied his gun-toting ex and a sweary vampire, his riotous journey across America begins.

Full of black comedy and wondrously NSFW, The Preacher is heaps of fun. 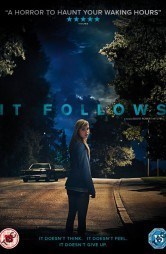 I watched It Follows, an incredibly creepy horror film which has stayed with me ever since. The premise is simple, but brilliant – there exists a deadly curse, where, if you catch it, you inherit ‘it’ – a shape-shifting presence which will follow its prey quietly and single-mindedly until it catches up with them, and kills them. ‘It’ can be passed along by sexual intercourse… and if one person is killed, the curse will pass back along the chain until everyone is dead. So the characters must try and outrun the curse… but it will always catch up with them. Atmospheric and creepy, the simple idea of something following you FOREVER raised the hairs on the back of my neck. Highly recommended. 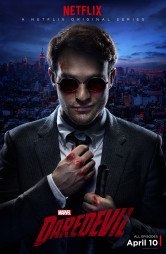 I watched the first half of the new season of Daredevil – it’s pretty boss so far, and The Punisher is Shane from The Walking Dead. Win! I’ve also read quite a few things, but none of the SFF – the only thing remotely close is Claudia Gray’s Ten Thousand Skies Above You.

One comment on “Friday Favourites: things we read and watched in March”