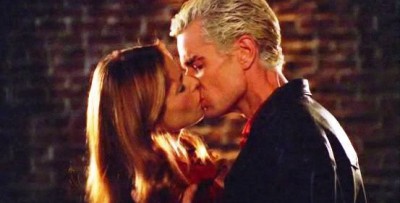 Posted on February 12, 2016 in Friday Favourites with tags

Valentines Day is almost here, so its time to eat a load of heart-shaped confectionary and fantasize about our favourite kisses from film and television.

There are so many great kisses, and we’ve missed out a tonne. Tell us which ones in the comments!

Ben and Leslie in Parks and Recreation

My OTP is Ben and Leslie from Parks and Recreation, and as such I am picking their very-first kiss. You see, Ben came to the little town of Pawnee way back when, and it was dislike at first sight between him and Leslie. Over time, this dislike grew to grudging respect, to friendship, and to a secret burning love that stayed almost hidden through Flu Season, the stressful Harvest Festival, spontaneous marriages, and appearances by she-devil Tammy 2.

But their passion was of a forbidden nature, as Ben was Leslie’s boss. After a weekend away together working, they admit how they felt but were unable to act upon this further, due to the sudden appearance of Rob Lowe, who neatly diffused any sexual tension by discussing how eating radishes helped with bodily functions.

But as soon as they returned to Pawnee, they threw caution to the wind, and the most adorable, half-geeky, fully-awesome couple was born, spawning the phrase, ‘I love you and I like you.’

Aragorn and Awen in Lord of the Rings: Return of the King

Aragorn and Awen’s kiss after they’ve won and everything is right in the world. It’s full of all the joyful, happy stuff that is significantly absent from the rest of the movies. Woo, happy endings.

Buffy and Spike in Buffy The Vampire Slayer 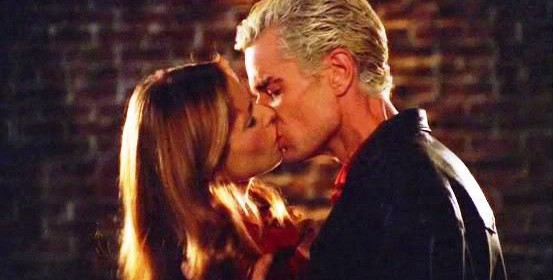 There are a lot of factors that make a good onscreen kiss (narrative importance, mise en scène, orchestral accompaniment etc.), but the most important fact is: a good jaw line. I don’t want to see tongue action, I don’t want groping, I don’t want weird moaning sounds. I want a jaw line that could slice through steel. And there is no better jaw in television that James Masters. It cuts straight to my heart. So, obviously a kiss featuring him and his jawline is the apotheosis of all kisses.

My favourite comes at the end of ‘Once More With Feeling’ Buffy finally makes her big confession about being dragged out of heaven, flees the scene and makes out with Spike while the orchestra swells in the background (along with our, er, hearts). It’s kind of romantic, mainly tragically codependent – but isn’t that the essence of fictional love?

Will and Alicia in The Good Wife

OMG favourite kiss. Obviously I can’t choose just one. Because I have a lot of favourite kisses! One of the best is the justifiably famous near-kiss from 2005’s Pride and Prejudice – you know the one, where the rain is lashing down and Elizabeth and Darcy are dripping wet and screaming at each other all like I HATE YOU AND YOUR FAMILY IS SUPER EMBARRASSING AND YOU’RE KIND OF A JERK BUT OMG YOU’RE SO HOT and they kind of move in at each other and then stop? That’s definitely the best almost kiss. There’s the best awkward kiss, which is from Strictly Ballroom, and there’s the best super-dramatic-cinematic kiss, which is from Beauty and the Beast (I mean, really, there are fireworks). There’s the best worst-idea-ever kiss, which is between Buffy and Spike at the end of the musical episode (‘with the rising music, and the rising… music?’). But my current favourite is the elevator kiss at the end of Season 2 of The Good Wife, because it’s a masterpiece of delayed gratification. It’s not technically Will and Alica’s first onscreen kiss (which is also quite good), but it has this fantastic two-minute-long lead, which follows two seasons of JUST KISS ALREADY MY GOD, where they’re in an elevator going upstairs to get a room and get it on, finally finally finally, but the elevator is stopping at every floor, and every time the door opens you can see their faces falling as things become increasingly awkward as the adrenalin wears off, and you’re like ‘damn it, it’s never going to happen; they’re going to wuss out again’ and then suddenly Will clearly realises the same thing and gathers his courage and then they just go at it.