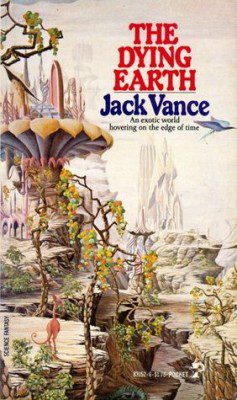 Back in my university days, in the late 70s, my forays into high fantasy were irregular excursions to middle earth, with a toe-dip into role-playing Dungeons & Dragons on the weekends. That is, until the day came for full immersion.

My friend Dave Morris recommended The Dying Earth and The Eyes of Overworld by Jack Vance, so long ago was this that the rest of the series, Cugel’s Saga and Rhialto the Marvellous, were yet to be published.

And so I opened the battered Mayflower paperback of The Dying Earth and read the words that opened up a whole new universe:

‘’Turjan of Miir sat in his workroom, legs sprawled out from the stool, back against and elbows on the bench. Across the room was a cage; into this Turjan gazed with rueful vexation. The creature in the cage returned the scrutiny with emotions beyond conjecture.’

The opening paragraph of one of my favourite ever books. Immediately you know you are in the hands of a master craftsman: a writer who can charm jewel-like images from the page, characterise a person with one well-chosen adjective, and create dialogue with the wit of Wodehouse.

What world was The Dying Earth? Our world, but so far-future as to be not our world:

‘The landscape was strange and new. There was a dark blue sky, an ancient sun. She stood in a meadow, encircled by tall gloomy trees. These trees were unlike the calm giants of Embelyon; these were dense and brooding, and the  shadows were enigmatic . Nothing in sight, nothing on Earth  was raw or harsh – the ground, the trees, the rock ledge protruding from the meadow; all these had been worked upon, smoothed, aged, mellowed. The light from the sun, though dim, was rich, and invested every object of the land, the rocks, the trees, the quiet grasses and flowers, with a sense of loss and ancient recollection.’

Vance peopled this world with characters more febrile than any other in fantasy fiction: all witty, crafty schemers on picaresque quests and mad wizards in laboratories, learning spells with names like Phandaal’s Gyrator, Felojun’s Second Hypnoitc Spell and  the Excellent Prismatic Spray. Or torturing their fellow thaumaturges, monsters and demons with exquisite traps, with spells, and, above all, with witty verbal barbs.

Not only did Vance give us lists of spells, but lists form part of his style, evoking an immense imagined world in a few short lines:

At a pivotal moment in The Dying Earth, Guyal of Sfere enounters a dubious augur:

‘What are your fees?’ inquired Guyal cautiously.

‘I respond to three questions,’ stated the augur. ‘For twenty terces I phrase the answer in clear and actionable language; for ten I use the language of cant, which occasionally admits to ambiguity; for five I speak a parable which you must interpret as you will: and for one terce, I babble in an unknown tongue.’

The amoral fantasy hero we’re so familiar with today is nothing new:  Mazirian the Magician, Liane the Wayfarer (a man who has the dubious distinction of dying twice in The Dying Earth!),  the ineffable  Cugel the Clever, ‘a man of many capabilities, with a disposition at once flexible and pertinacious’: these are all Vancian creations.

We laugh at their roguery, which Vance rendered with language almost Miltonic, yet at always tongue-in-cheek:

‘Deep in thought Mazirian the Magician walked his garden. Trees fruited with many intoxications overhung his path, and flowers bowed obsequiously as he passed. An inch above the ground, dull as agate, the eyes of mandrakes followed the tread of his black-slippered feet.’

Such is the Dying Earth, such torpor in the cadence here, the drugged, drunken fruits, that lulling repetition of syllables ‘path’ and ‘passed’, of the imagined slow turning of the watching plants, all speaking of the sad melancholy of the end of human life on Earth.

The one word for these books and the man behind them is inimitable: in the years since I first read The Dying Earth, I’ve come across no other writer so able to evoke a world with such pithiness and spritz.

The Dying Earth is a world from which a reader – and I include myself, then as now – might never want to leave. But with these four volumes we sadly must content ourselves. These masterpieces, in my view, are the pinnacle of Vance’s oeuvre; a pinnacle of a genre I have loved from that first day when I learned that there was more to the fantastic than Tolkien and Gygax, and the wonder came flooding in.

Christopher Priest’s Obituary in The Guardian: